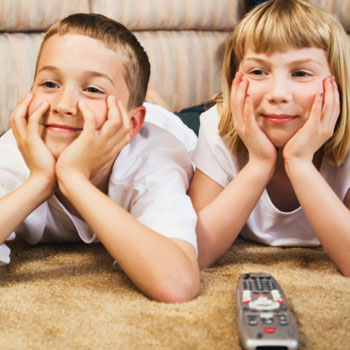 Remember the days when there was no TV? Well plenty of us don't. Today television is the norm for all families and it's really cut into 'family time' in a big way. Talk is to a minimum as everyone stares at the screen. Set up a few rules and regulations and you can prevent your whole family from becoming strangers in their own home.

Set specific times for watching television. Many kids turn on the TV as soon as they get home each day. On weekends they wake up and the first thing they do is turn on the TV. If you don't take control of it, television will take over your children's life. During the week, television viewing should be kept to a maximum of two to two and a half hours. There are plenty of chores and homework tasks for the kids to finish when they get home each day.

Don't have the television on during dinner and let everyone sit in front of it and eat. Dinner is a time for the family to be together. It's a time for everyone to sit together and talk about their day. We'd never know what exciting thing happened at school or that our spouse had gotten a raise if we were all mesmerized by the TV. If we don't spend time talking together then we really miss out on important events and changes in each other's lives. This is a truly sacred time when we all sit at the dinner table.
It's no secret that obesity is on the rise. It's also not a surprise why. When I was a child we went out to play when the sun came up and came back in when the sun went down, we played outside and ran around all day. Today kids have so many video games or favorite show that they can literally stay in the house for days. When do people tend to overeat? When they're distracted by something, like TV or video games, they don't watch what they are putting into their mouths. Our kids are too young to be unhealthy and overweight. They are the largest growing segment of the population suffering from obesity. Children are becoming couch potatoes from watching too much television.

Kids need rules for watching TV, and this doesn't exclude in the bedroom. Many kids now have a television in their bedroom. It isn't ok for them to have the TV on all night long just because it is in their room. If you allow your kids to have the TV on as they go to sleep, then put the timer on so it shuts off. Having the TV shut off automatically will ensure they are able to get a good night sleep.

Just as important as how much television a child watches, is WHAT they watch. Just because it's on TV it doesn't mean that it's appropriate for young views, especially some daytime shows and nighttime dramas. Some are inappropriate for children under eighteen. Cable and satellite don't make it any easier to monitor what they watch. On regular television most program don't' show until after 11pm but on cable they can be on all night. Those stations are not regulated like the local channels; therefore as a parent, actively paying attention to what your kids are watching is important.
If you are concerned the kids may be watching shows while you aren't home then you can block certain stations. If you block a channel that show programs you feel are inappropriate for your child's age then they won't be able to view that channel. You can call your local cable or satellite company to find out how to go about doing this with their service. If your kids complain, sit them down and explain why they can't watch the channel. Entering into a healthy discussion about TV programs is important. As your kids age, they can handle heavier subject matter, but that is the decision of the parent.

The TV doesn't have to be an evil addition to the home but it just needs to be kept under control. Children need to be active not sedentary. Parents need to regulate television time for their kids. Instead, go to the park or the zoo. Real life is much more interesting than anything on TV.

For more information on raising happy and healthy kids, visit http://www.parentingzoo.com/articles/parenting.htm and then take a moment to subscribe to the new online parenting magazine and online community - ParentingZoo at