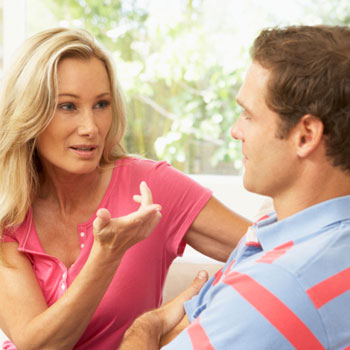 "Where is this relationship going?" It might be a question that strikes fear into the hearts of men, but its answer is important to partners who want to know if their mates are in it for the long haul. The timetable may vary - there are no hard and fast rules to getting an idea of a relationship's long-term outlook - but be sure you're both ready to have the conversation before broaching the subject. One of the reasons why the commitment convo ends badly sometimes is that the one asking the question doesn't know what he or she wants from the relationship. Establish this first - where do you see the relationship going? What sort of commitment do you want? Marriage? Cohabitation? Kids? All of the above? Have a clear-cut objective of what you want before asking the question of your partner. Then check and see if that plan meshes with the rest of your life goals, such as career and children. Next, gauge where his feelings are.


Have you met his family? Talked about his goals for the future? If he's not willing to commit past next Saturday's date, then now isn't the time to talk about going the distance...unless you're ready to face the fact that he's probably not ready and will be scared away. Then make sure that the relationship changes that you're proposing are realistic. If you've been seeing each other casually and non-exclusively for three months, then it's probably a stretch to assume you'll move in together in the next few months. A more realistic next step might be dating exclusively. If it's been a year or so of committed partnership, then that's a more realistic scenario for taking things to the next level. Keep things cool and low pressure so that your guy is amenable to whatever it is you need to discuss.