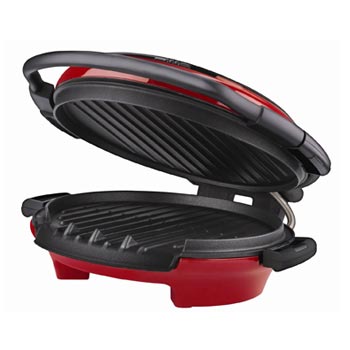 Knock out the fat! That has been George Foreman's signature saying since 1995 about his line of grills. The George Foreman Grill has come a long way from the simple countertop versions found in college dorm rooms. This kitchen aid can be found in a multitude of colors, styles and shapes with outdoor versions now being available to consumers. But do these grills really create flavorful meals without the unwanted fat?

George Foreman opened many doors to home cooks with his version of indoor grilling. Food is placed inside the grill, the lid is lowered, timer set and your food is cooked without the added fat of frying and in less time than oven baking. Earlier models of the George Foreman Grills worked but had their downfalls with some models being bulky and others hard to clean. Over the last 10 years, these grills have improved dramatically especially with the variety of models now available.

The top-selling George Foreman Grill by far is The Champ. These grills are the small versions commonly used by those with limited space. The Champ features a 36 square inch surface which can be used when cooking for two. The grill plates are not removable but have a non-stick coating which makes clean-up simple. Since the surface area of this grill is quite small, the non-removable plates don't take away from this little grill's likable features. The downfall of The Champ is the size which doesn't always hold enough food for two people as the product describes.

One of the newest George Foreman grills to hit the marketplace is the G-Broil. Unlike some older models, the G-Broil's lid has locking latches that allows for vertical storage without the grill opening. The touch-safe surface on the top makes this model safer during use.

The G-Broil features a 72" grilling surface allowing enough cooking space to cook for up to four people. This version does not have removable grills making clean up somewhat difficult.

A giant step into the future of indoor grilling is the largest of the George Foreman Indoor Grills, the 360 Grill. This versatile grill can cook your steaks, omelets and even deep-dish pizza. The large 106 square inch cooking surface provides enough space to cook a meal for an entire family.

Best of all, the 360 Grill is equipped with removable grill plates that are dishwasher-safe. Five various plates are included that can be interchanged accordingly to what you want to prepare. The downside of the grill is the size; ample storage space will be needed to store this mighty machine.


These patented grills are designed to sit at a slope allowing the fats of meats to drain away into drip pans. Knocking out the fat can also mean losing flavor and meat tenderness. Utilizing simple cooking techniques can resolve many flaws that may come into play when cooking on indoor grills.

For foods cooked on George Foreman grills, it is important to not overcook meats as they tend to become dry. Let meat rest before carving to help the juices redistribute just as you would with stove top or oven cooking. For adding flavor that may be lost with the drained fat, use spices and herbs or marinate the meats to enhance the flavors of the foods. Individuals wanting to rid fat from their diet especially those found in meats will love the George Foreman Grills. Those that prefer the tenderness that fats add to meats and want real grill flavor should forego these types of grills and stick with the backyard versions.