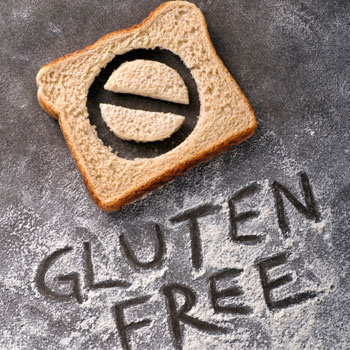 Sufferers of this uncomfortable and sometimes embarrassing condition may experience symptoms hours after eating to a full day afterwards. Knowing what symptoms to look for can help identify the problem, but if you experience a few or more of the symptoms on the list below, it is important to see a doctor for diagnosis. Your doctor may test to see if you have celiac disease and may recommend eliminating certain foods to determine if that eases your symptoms.

You may experience some of these symptoms when you eat certain foods that contain gluten. The severity of the symptoms depends on the person, as well as how much gluten is consumed. While following a gluten-free diet may eliminate all or most of the symptoms, it also may mask a more serious disease, so see your doctor about your symptoms for proper diagnosis.


How many people have gluten intolerance?

Symptoms of gluten intolerance are experienced far more than celiac disease. A 2012 Mayo Clinic survey found that 1.8 million Americans have celiac disease, and another 18 million have gluten sensitivity. It is hard to say exactly how many people suffer the symptoms of gluten intolerance because so many people try to treat it on their own without consulting a professional. Likewise, just because there are more gluten-free products on the market than ever, not everyone on a gluten-free diet is sensitive to it. It has been touted as a weight-loss diet and has become sort of a fad.

Gluten Sensitivity: Is It Real?

Dr. Jay Marks, an internist and gastroenterologist, who for 20 years was an Associate Director of the Division of Gastroenterology at Cedars-Sinai Medical Center and an Associate Professor of Medicine, In Residence, at UCLA, told MedicineNet.com, "Gluten sensitivity is all the rage these days. Not a week goes by when I don't see a patient with gastrointestinal symptoms who has started a gluten-free diet – or what they think is a gluten-free diet - and improved." He explained, "They described their symptoms as feeling bloated and gassy and experienced abdominal pain, diarrhea and abdominal cramping."

Despite all evidence to the contrary, some people suggest that gluten intolerance may not even be real! Research has been mixed. In one recent study published in Gastroenterology, the journal for the American Gastroenterological Association, Dr. Peter Gibson challenged his own recent study results. He set out to test his original results that suggested gluten sensitivity is a real condition and lent credence to gluten-free diets.


He performed new research involving 37 participants who met criteria for non-celiac gluten sensitivity. The participants cycled through various diets, serving as their own controls. The results did not match that of Gibson's first study. This time, he found that people reported painful symptoms after each meal, whether it was gluten-free or not.

Participants complained of gastrointestinal symptoms, regardless of the diet they ate, suggesting that symptoms might be psychological. Of course, others argue that the condition is real. Whatever the case, the trend is not likely to fade anytime soon. People are becoming more and more concerned about what they eat, the ingredients in their food and how those foods make them feel. Thirty percent of people express a desire to reduce their dietary gluten, according to NPD Group, a market research company.

What to Do If You Think You Have Problems Digesting Gluten

If you suspect that you have a gluten intolerance based on the symptoms listed above, the common reaction is to remove gluten from your diet. But don't be in such a hurry to solve the problem on your own that you may overlook a more serious issue.

According to Dr. Stefano Guandalini, the director of the University of Chicago Celiac Disease Center, getting tested is the first step in getting an accurate diagnosis. "If you think you might have celiac disease, the biggest mistake is to begin a diet without being tested," Guandalini told WebMD. If you experience symptoms, see a doctor to get tested before going gluten-free. The difference in symptoms between celiac disease and gluten intolerance is subtle. You can't be sure if you have one or the other without being tested.


The danger in self-diagnosis and treating symptoms with a gluten-free diet is possibly missing the diagnosis of a different and potentially dangerous disease. Being misdiagnosed and having a disease go untreated can cause more problems down the road, even if the diet itself is safe.

But if you have concerns, go with your gut. Make sure your doctor rules out celiac disease before declaring you have gluten intolerance; some experts suggest a 60-day period without gluten, then slowly reintroducing these foods to test how they make you feel, eliminating the ones that cause painful symptoms.